Lizard Wizard: You are an Arch-Mage competing to control the land of Astoria… a land of Dragons!

Astoria is a land pulsing with magic and intrigue! A handful of Arch-Mages are vying for the loyalty of wizards across the land so that they can wield ultimate power.

Lizard Wizard is a game from the team that brought you Raccoon Tycoon. Aspects of gameplay will be familiar to fans of RT, and will add a bit of extra depth and strategy.

In Lizard Wizard, players compete to recruit wizards from seven unique schools of magic, build mystical towers, research powerful spells, summon helpful familiars, and search dark dungeons for gold and items of power. Only one Arch-Mage will rise above the rest and control the land. Will it be you?

Lizard Wizard is an action-selection game. On your turn, you may perform one of the following six Actions:

ACTIONS
On a player’s turn, they may perform one of the following six Actions:
1) GATHER REAGENTS
Just as there are seven schools of magic, there are seven magical reagents, or ingredients, that fuel the magic of Astoria. Knowing where these natural wonders can be found is the essential starting point for every young wizard. Sometimes they use familiars to perform this errand, but it is still very common to find even the most powerful arch-mages lurking in the Enchanted Wood, searching for the most pure reagents.

2) CONVERT REAGENTS TO MANA
Long ago, the wizards of Astoria learned how to convert reagents into mana, the magical energy that powers all things. The process is no longer dangerous, but it still takes great focus and knowledge.

3) RECRUIT WIZARD
The Arch Mages of Astoria are vying for ultimate power, which can only be achieved by drawing several lesser wizards into their circle of influence. They do this through demonstrations of their magical ability. Occasionally, their attempts to recruit a wizard are challenged by one or more rivals, and a Wizard’s Duel occurs. These contests of magical power can drain even the most powerful mage.

4) RESEARCH SPELL
Arch-Mages have the ability to learn spells from any of the seven schools of magic. Once they have researched a new spell, it still must be cast with reagents (and the help of a familiar) before it takes effect.

5) CREATE A TOWER
Magical Towers amplify the power of wizards of each school of magic. Towers may be created through powerful magic, or built by workers who must be paid.

6) SUMMON FAMILIAR:
Familiars are magical spirits that are summoned and inhabit the bodies of mortal creatures. They are essential servants who perform many vital services for wizards: They can be used for simple errands, such as gathering reagents or gold. They are the only ones who can locate the ever-shifting entrance to the famous Dungeons of Astoria. They are also essential assistants in the complex rituals required to cast spells.
Use the Card for one of four purposes:
a) Score one School of Magic (2 Gold/ Card of the same School of Magic as the Familiar)
b) Gather Reagents shown on the Familiar Card and Cast any number of Spells
c) Clear the Spell Offer, Replace them with four new Spell Cards and select one for free
d) Enter the Dungeon

End Game and Scoring
The game will end when any one of the following decks is depleted: Familiar, Tower, Wizard, Spell.
When the game ends, the players will score points for each Wizard and Tower Card combo (10 VP if they are of the same school of magic, and 5 VP if they are not), 3 VP for each Spell Card in schools of magic where they have a matching Wizard and Tower, 1 VP/ Gold gathered from the dungeon or from scoring with a Familiar Card, and any points derived from the special abilities from spells.

There are no reviews yet.

Be the first to review “Lizard Wizard” Cancel reply 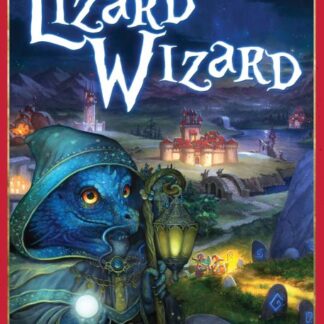